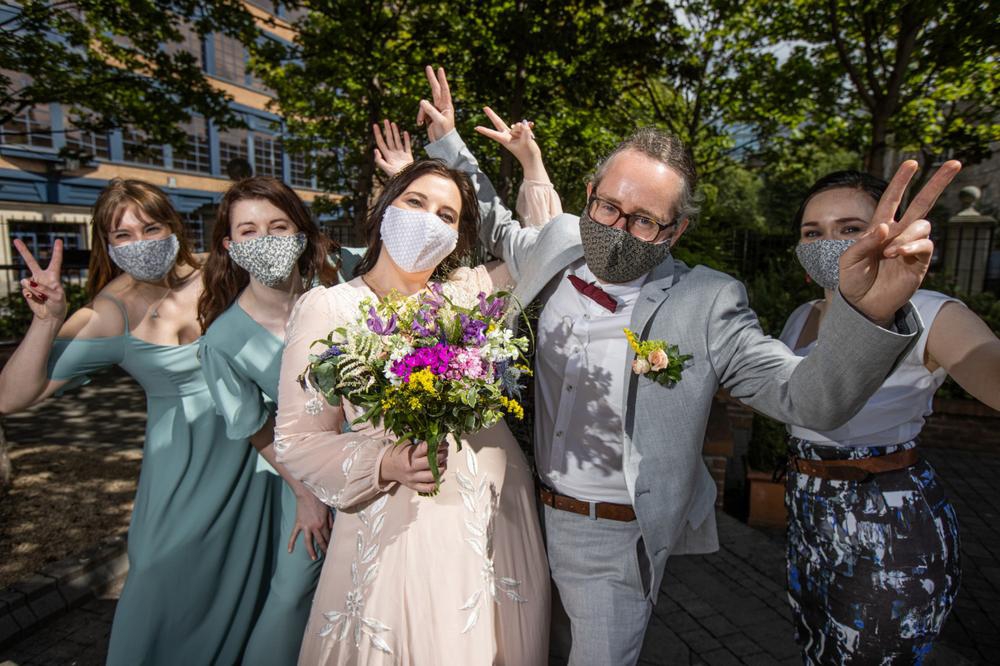 Since lockdown restrictions eased earlier this summer for weddings there has been a mini-boom in the small wedding day business. These days Dublin’s Registry Office is packed with up to fourteen loving couples looking to say “I do” on a daily basis.

Some 240 couples have celebrated civil weddings in the building in Lower Grand Canal Street since July 6, when the HSE Civil Registration Service declared full steam ahead for the love train.

Things are so busy that ceremonies are scheduled for every half-hour each day.

The Sunday Independent met some couples and staff last Tuesday and saw the safeguards and restrictions to stop the virus gatecrashing their weddings.

Ciara Burke and Stuart Geelon arrived with bridesmaids Katie O’Neill and Laura O’Brien and with Stuart’s sister Emma, who agreed to take the role usually filled by a bestman.

All five brought face masks that matched their outfits and their temperatures were recorded by staff member Joe Timmons. They were offered hand sanitiser and filled in Covid-19 forms before going into the large, theatre-style room for the ceremony. Most of the seating was blocked off for social distancing.

In former times, 60 people could attend a civil marriage ceremony, but the total number of people allowed in the room was 13, which included the couple and the registrar.

There was a Perspex screen between the registrar and the couple. Ciara and Stuart did not have to wear the masks when exchanging vows, but they donned them later.

Ciara (32) is from Navan and Stuart (36) from Bray and they first met at the Hunters Moon Festival in Carrick-on-Shannon in Co Leitrim in 2013, where Stuart was appearing as “an experimental noise performer”.

“I heard him before I saw him,” said Ciara. Both are busy in the arts world in their spare time. Ciara works as a technical writer for Amazon and Stuart is a project worker for a homeless charity.

“We had planned to get married in Copenhagen in June. Hopefully we’ll be able to go there for our first anniversary,” she said.

Argentinian couple Pablo Barrero and Marisa Fernandez were married earlier that day. Pablo is an Irish citizen who has lived in Ireland for 15 years. He is a travel agent and lives in Dublin.

Pablo (46) and Marisa (47) said they love the friendliness of the Irish people, the music, culture, “awesome landscapes” and the Leinster rugby team. They have postponed their honeymoon plans.

A witness at their wedding, Merschon Hutson (47), said: “Their families were not able to travel to the wedding. That is the sad part.”

Their other witness, Maria Panza, said she travelled to ‘The Big Smoke’ for the wedding from her home in Kilcock, Co Kildare, and it was her first time to leave the county since the March lockdown.

“For me, the ceremony was super emotional because in these times you appreciate all the little things and it’s a big deal when two people come together. It’s all about the love. At this time of fear and uncertainty, we celebrate love more,” said Maria.

Ben Prenter (48) and Sandra Williams (47) from Sallynoggin got married in the afternoon. Sandra is bar manager at Blackrock rugby club and Ben is a storeman for Dun Laoghaire Rathdown housing department.

They said they were friends as teenagers before becoming a couple in their late twenties. Present at the ceremony were adult daughters Suranne and Ebony Joy and Sandra’s father Tweedy Williams (74).

Ben said: “With so many weddings cancelled, I feel privileged and honoured to be married. And I feel very lucky.”

Sandra added: “I liked the ceremony. There was no fuss and the registrar Hannah Conway was lovely.”

Louise Dodrill (34) is executive registrar and marriages manager and she loves her job. Despite the upheaval caused by Covid, she believes “love is alive and well and if you can make it extra-special, why not”.

She said either a Perspex screen can be used during the ceremony or the registrar can wear a mask or a visor. Couples do not wear masks during the exchange of vows, but sanitising measures take place after each ceremony.

There have been drawbacks because of the coronavirus and a lot of loved ones are prevented from flying back to Ireland to attend weddings.

“But you can’t hold back an Irish wedding. It will happen eventually. A lot of people getting married now just want to have the legal side done,” she said.

She had the tough job of telephoning couples whose weddings could not proceed because of the health measures. “It’s natural that people are not happy when you are postponing their wedding.

“Most people were exceptionally understanding. A lot of people had decided they weren’t going ahead at that point. They were just happy to get a phone call to provide them with an alternative option,” she said.

The civil registration service also covers Wicklow and Kildare. Dublin is fully booked to the end of the year, while there are some dates available in Wicklow and Kildare in November and December. The number of civil weddings that can take place in Bray has been increased in response to the demand.

A growing number of people are choosing civil marriage ceremonies ‘off-site’ in hotels and in beautiful buildings such as City Hall, the Maritime Museum in Dun Laoghaire, and the Museum of Literature.

Ms Dodrill can empathise with all the couples whose plans were thrown into disarray as she was due to get married in a civil ceremony at City Hall in Dublin this month but it had to be postponed.

“I haven’t been able to find a new date for my own wedding yet because I was too busy rescheduling everyone else,” she said.

She met her French fiance Said one New Year’s Eve in an Irish bar in Paris. She was with a group of female friends in the French capital when they ended up in an Irish bar celebrating the New Year one hour later to correspond with the clock back home. She struck up a friendship with Said and later he moved to Dublin to be with her.

They are thinking of getting married in France next year. “I haven’t put enough attention into my own wedding, to be honest. We’re thinking of maybe a chateau in the Loire Valley,” she said.