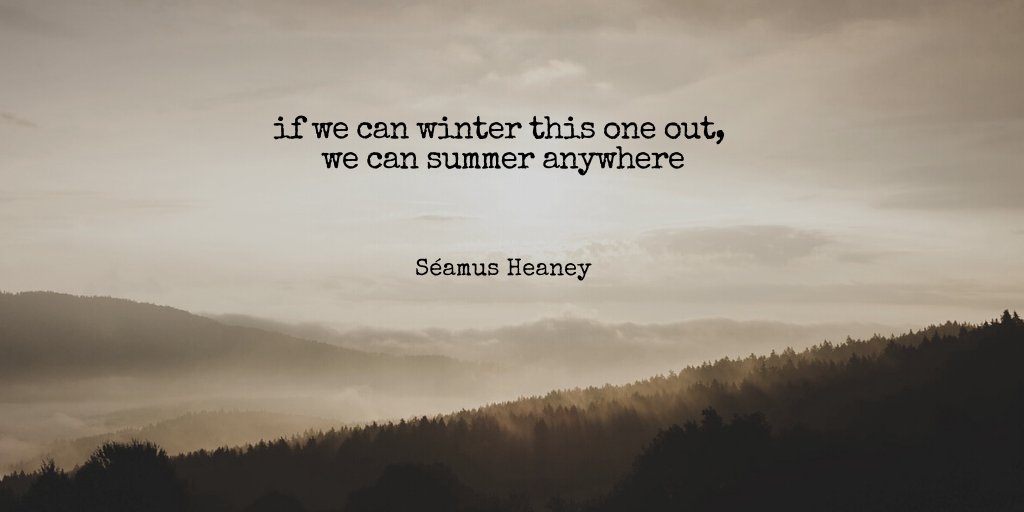 One line from the Nobel-Prize-winning Irish poet has become a semi-permanent refrain on radio, TV and Twitter during the course of the pandemic.

“If we winter this one out, we can summer anywhere,” the poet, who died in 2013, was supposed to have said.

The reason that the line has become so popular is obvious, offering a beautiful image of hopefulness during a dark time.

But despite the ubiquity of the quote in recent weeks – it was even quoted by Ryan Tubridy on the Late Late Show – the source remained something of a mystery.

It’s not from a poem, as you might expect, nor even from any essay or article Heaney wrote.

Back in January 2019, the Twitter account of the Listen Now Again exhibition tweeted out the line for the first time.

“If we winter this one out, we can summer anywhere”

The quote was simply captioned: “Interview with SH, 1972.”

Little notice was taken of the line until it was tweeted out again by the exhibition on 16 March. It got hundreds of re-tweets and quickly took off, being referenced by people in relation to the ongoing Covid-19 situation.

A tweet by the painter Colin Davidson referencing the quote received thousands of likes and hundreds of retweets.

Soon, it had become a common sight not just on social media but in the real world, appearing on walls and banners across the country.

But where did it come from?

The quote can be traced back to a short article in the Cork Examiner back on the 22 November 1972. Under the headline “New book of poems launched” in a corner of page six, the paper wrote:

“If we winter this one out, we can summer anywhere”. This was the comment of Bangor born Seamus Heaney whose book of poems, “Wintering Out”, was launched at a publication party in the Peacock Theatre, Dublin, last night. He was referring to the situation in the North, and said that he had taken the title of the book from the old farming custom of wintering cattle out in pasture.

While the article is wrong about Heaney’s birthplace – he was born in Derry – the paper nonetheless seems to be the source of the now famous quote.

Most of the collection ‘Wintering Out’, published in 1972, was written at the height of the Troubles by Heaney while he was teaching in Berkeley, California.

Speaking to Dennis O’Driscoll for the 2008 book Stepping Stones, Heaney said of the title: “No spring was being promised, but I still didn’t think of the title as despairing.”

“It came,” he said, “from memories of cattle in winter fields. Beasts standing under a hedge, plastered in wet, looking at you with big patient eyes, just taking what came until something else came along. Times were bleak, the political climate was deteriorating. The year the book was published was the year of Bloody Sunday and Bloody Friday.”

“Fundamentally, the idea comes from cattle, who you would winter out,” Katherine McSharry said, through the leaner colder months.

“The idea of wintering out has that sense of survival,” she said. For Heaney, it was “comfortless, but with a note of survival.”“That’s characteristic of Seamus Heaney’s body of work. A rootedness, a sense of reality, an an engagement with the world around him but with a sense of hope, even if it is tempered by realism.”

In the journal The Listener in December of 1972, Heaney also wrote:

It is a phrase associated with cattle, and with hired boys also. In some ways, it links up with a very resonant line of English verse that every schoolboy knows, Now is the winter of our discontent. It is meant to gesture towards the distresses that we are all undergoing in this country at the minute. It is meant to be, I suppose, comfortless enough, but with a notion of survival in it.

Others have also pointed to the influence of a poem by the Tyrone poet WF Marshall, published in 1929, which includes the line: “I wunthered in wee Robert’s, I can summer anywhere”.

Now, nearly 50 years later, Heaney’s innocuous line has resurfaced – this time, not as a comment on Northern Ireland but on the lockdown many people are facing, with no sense of when it will all end.

McSharry said it was great to see the line being shared as a source of contentment for people. She called it an “organic process of creation in the community, which is something I think Seamus would have liked”.