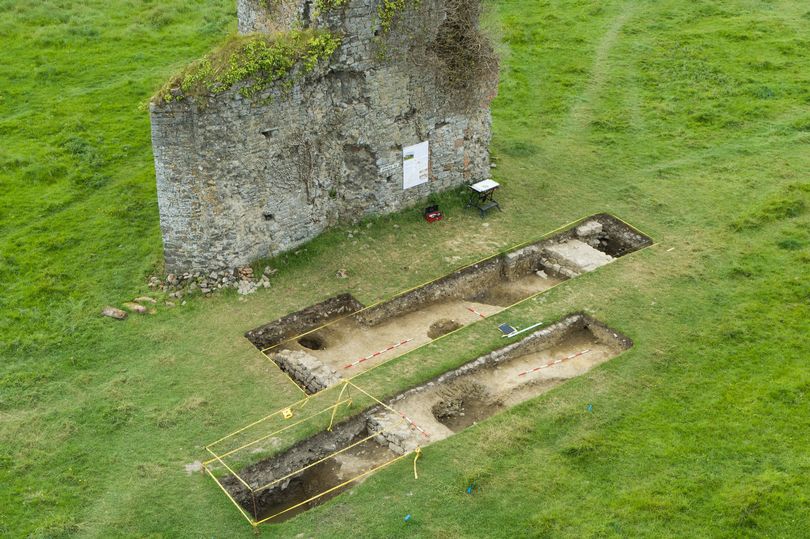 Hugely significant’ finds of a rare French structure and medieval pottery have been found during recent archaeological excavations in Co Meath, supporting a long-held belief that the site was once home to Cistercian monks from Normady.

Medieval expert Matthew Stout and his wife, archaeologist Geraldine have described the finds of 13th century French jugs and ceramic roof tiles as ‘hugely significant’ at the site in Beamore, just outside Drogheda

Surveying the ‘unusual features’ of an existing gate house in the field, two of Ireland’s foremost medieval building archaeologists David Sweetman and Con Manning say that a diagonal French buttress is ‘very rare, if not unique in Ireland,’ according to Matthew

The excavations were undertaken at the behest of landowner and local historian John McCullen who believed there was something special about the ruins which lie in one of his fields.

“John has always believed that Beaubec is a special place and we are fortunate people that we were able to unearth this amazing story,” said Matthew.

Beaubec is ideally located to throw light on the involvement of the Cistercians in commercial development and international maritime trade in the Boyne Valley during the medieval period.

“The main aim of the project was to uncover structural remains of the layout of the Cistercian foundation, retrieve evidence of French pottery and identify the kind of agricultural produce that the monastic grange would have exported and imported.

“It was a big site but we struck gold almost straight away and filled a shed with medieval pottery and artifacts which will now go for post excavation work.”

“We uncovered a corn drying kiln and even dried peas which prove that crop rotation was ongoing even back in the 13th century.”

The excavations last month were the start of a €50,000 three-year project, funded by FBD Trust and administered through the Kilsharvan Community Council.

Author and archaeologist Geraldine Stout has a particular interest in the Cistercians, having worked on a similar site in Bective in Meath and says they were great innovators and farmers.

“We know that Walter de Lacey gave lands to this Abbey in Beaubec in Normandy in 1215, so there would have been about 100 monks living here up until the 16th century,” she said

“De Bello Becco was flourishing in Ireland in 1302 when it had to pay a tithe of 29s 4d to the Diocese of Meath, which placed it in a group of the highest valued churches in Meath

“Archaeology is not about finding treasures but answers, but I think in this case we’ve hit the jackpot on both fronts and we’re hugely looking forward to getting back here next year.”