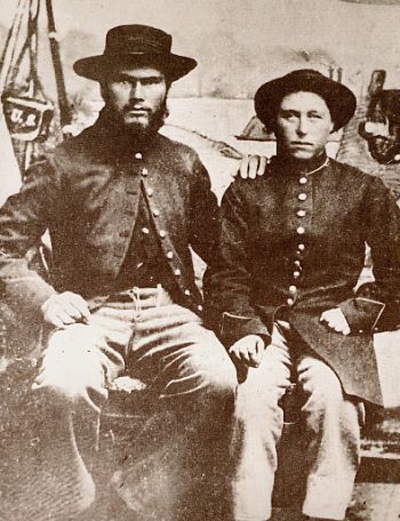 (Photo: Jennie Hodgers on the right – Aka Albert Cashier with a fellow soldier)

Tune into TG4 this Friday to see the fascinating true story of Jennie Hodgers, an Irishwoman who posed as a man to join the Union Army and fight in the American Civil War.

Jennie Hodgers completed a three year tour of duty in the American Civil War and earned a military pension and carried her amazing secret for over 50 years.

The Irish woman fought as a union soldier at the battles of Vicksburg, Nashville and the 10-week River Campaign.

Jennie was the daughter of Patrick and Sallie Hodgers and was born in Ireland in Clogherhead, County Louth on Christmas Day 1844.

Her father was a coachman and horse trader, who travelled around the country going to fairs.

Jennie was dressed as a boy for reasons of both safety and convenience.

She was one of hundreds of women who enlisted for active duty on both sides in the American Civil War.

Unlike the rest of those women, Jennie’s male disguise was un-discovered.

She passed the medical to enlist because the doctor only checked the feet and hands – the limbs needed for marching and pulling a trigger.

She served as Albert D J Cashier, Private First Class, when she enrolled in the Union Army on August 6 1862, following President Abraham Lincoln’s call for an extra 300,000 men. Jennie was just 18 years old at the time.

Jennie went through the same physical and mental torture as her male accomplices, surviving bloody sieges and even a capture by rebels. Jennie escaped the imprisonment by cunningly out-smarting a guard and fleeing back to the Union camp.

Jennie’s full story is recounted in TG4’s fascinating documentary this Friday 10 November 2017 at 7:30pm. The programme is broadcast in Irish with English subtitles.